In 2015, the Celia Cruz novela came out on Telemundo, I loved it and rarely missed an episode(slowly rewatching it on Netflix now!). When it was ending I came up with the idea to make a yarnbomb in her honor. I failed and decided do something for her birthday the next year instead.

Most yarn is Lion Brand acrylic with the exception of the orange(loops and threads) wig. 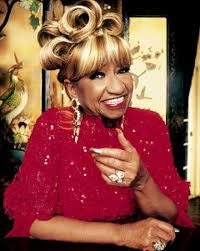 I hope this yarnbomb lighten up the day of those that pass by it.

Try and live your each day as if you were Celia singing Bemba Colora live. AZUCAR!\

Back to Yarn Bombing Dairies